The dream of flight - the conquest of the air - haunted successive generations for centuries. Over the centuries various designs for flying machines were recorded on paper and models were made by the pioneers of aviation.

It was not until the late-18th century during the Enlightenment pursuit of scientific knowledge that Man gained the ability to travel through the air - by balloon.

The balloon was born in France in 1783, animals (a sheep, cockerel and a duck) becoming the first aeronauts due to uncertainties as to what effect travel through the upper atmosphere would have upon the human body.  Man was to travel by balloon for more than 120 years before the first aeroplane left the ground and the dawn of powered flight began.

Nevertheless the actuality of aerial travel - demonstrated by the evolution of the navigable airship during this time - encouraged a favourable climate of opinion towards all aspects of aeronautics. It initiated an international search for the first heavier-than-air aerial machine, centred around a few key individuals.

Many of the early members of the Royal Aeronautical Society and their descendants had the foresight to leave for posterity their books, papers and photographs to the Society. Included in the Society’s archives are the original papers of a number of the major pioneers in early aviation whose work viewable via this website became a series of 'stepping stones' which led to the evolution of powered flight and the development of the aeroplane.

Learn more about the lives of some of these pioneers in this section. 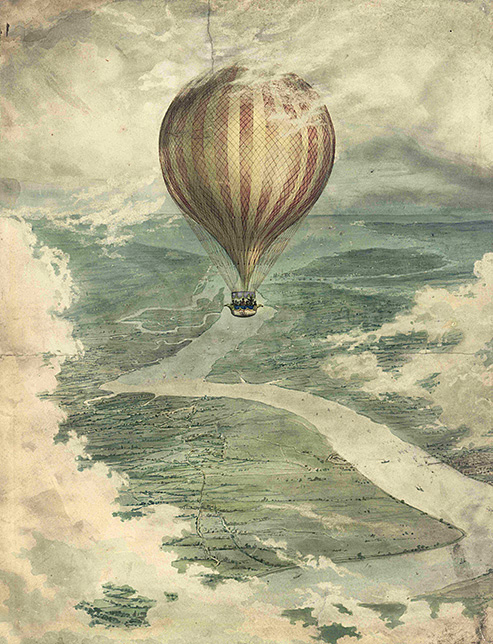 The 'Vauxhall' or 'Nassau' Balloon over the Medway, 1837. Unknown artist.