Their achievement was founded on years of wind-tunnel experiments on wing surfaces of various configurations, and with their own kite and glider designs. These they flew at the four hills of Kill Devil, near the village of Kitty Hawk, North Carolina, selected by the Wrights for its favourable winds. During 1900 to 1903 they travelled there from their home in Dayton, Ohio.

Wilbur and Orville were successful and experienced mechanical engineers when they decided, in 1896, possibly inspired by Lilienthal’s death in that year, to investigate this new form of transport.

As might be expected, they researched all the best information that could be found in America and attempted to apply to the task the knowledge - often confusing and contradictory - they gleaned therefrom. But perhaps the quality that ensured their eventual success at the end of 1903 was that they then decided to do their own research and proceed logically, one step at a time, learning as they went. It is also important to note the encouragement given to them by Octave Chanute in these early days when the inevitable difficulties arose.

Thus they built a wind tunnel to look at the quantifiable, comparative effects of different aerofoils and different wing shapes. They built glider-kites from which they learned the necessity for good lateral control - wing warping, in their case.

Finally, and this was perhaps the crucial step, they realised that to be a commercial success their air vehicle had to have its own motive power, and that a lightweight engine was required. This was not too daunting, given their talent and experience as engineers, and the solution of the problem of driving their propellers - chains - came straight from their bicycle business. Wilbur’s pioneering design work on propellers gave them probably the most efficient ones to date. Controlled, powered flight was then only a matter of time, building on all the hours they had spent with glider-kites and in their own gliders.

With their reliable engine, they soon acquired the new skill of piloting, and opened the way for others by their inspiring demonstrations with the ‘Flyer’. The impact of their achievement was perhaps felt more strongly in Europe than in the USA, particularly in France, where rapid progress was soon apparent, and in not much more than a decade the aircraft emerged as a major weapon of war.

Within a month of undertaking their first flights on the North Carolina dunes, in January 1904 the Wright Brothers began construction of a new larger, more powerful Flyer, the flight trials of which they undertook at a new site much closer to their home - Huffman Prairie - located eight miles outside of the city of Dayton.

During 1904 and 1905, the Wrights went on to perfect their invention in their second and third powered Flyers. In their Flyer III of 1905, they could remain airborne for over half an hour at a time and perform circles and figures-of-eight. The Wright Flyer III was the world’s first fully practical powered aeroplane, and its all-round performance was not to be equalled by any other aircraft apart from later Wright machines until 1909.

After 1905, the Wrights did not fly again until May 1908, concentrating their efforts on improving the aircraft engine's performance and in selling their invention to interested parties, but their achievements with the 1905 Wright Flyer III inspired aircraft development in Europe. The Brazilian pioneer of European aviation, Alberto Santos-Dumont (1873-1932) after his experiences in balloons, in 1898 built the first of his 14 airships. On 19 October 1901 Santos-Dumont became the first man to circle the Eiffel Tower in his No.6 airship design, and was to continue his airship numbering sequence when, inspired by the Wright brothers, he moved into aircraft construction. Santos-Dumont’s No.14-bis design achieved the first aeroplane flight in Europe on 23 October 1906 at Bagatelle, Bois de Boulogne, Paris.

In May 1908 Wilbur Wright travelled to France where his demonstrations of the flight control of the Wright A at the Hunaudières racecourse, near Le Mans, and later at Auvours and Pau, revolutionized the development of European aviation.

To prevent others commercially exploiting their design, the Wrights had compiled a series of patents around their invention and much of their time and energy in subsequent years was consumed in defending these patents in various legal contests rather than developing new aircraft designs.

The Wrights were a family of four brothers and a sister - Wilbur, Orville, Katharine and their elder brothers Reuchlin and Lorin. On 30 May 1912 Wilbur Wright died after contracting a form of typhoid fever and thereafter Orville and Katharine spent many years ensuring that their achievements would be properly recognised. As a result of a particularly bitter dispute with the Smithsonian Institution regarding the Institution's labelling of S. P. Langley's 1903 Aerodrome (which stated that, "In the Opinion of Many Competent to Judge, this was the First Heavier-than-Air Craft in the History of the World Capable of Sustained Free Flight under its own Power"), on 31 January 1928 Orville Wright shipped the original 1903 Wright Flyer to the Science Museum in London, in whose care the aircraft was to remain until after Orville’s death.

Orville Wright died on 30 January 1948. At a handing-over ceremony in October 1948 at the Science Museum, the American Civil Air Attaché Mr L Satterthwaite formally accepted the original 1903 Wright Flyer on behalf of his Government. A replica constructed by the de Havilland Aeronautical Technical School took its place. On 17 December 1948 - the 45th anniversary of the Wrights' first flight - the original 1903 Wright Flyer was formerly presented to the Smithsonian Institution. It was displayed in the North Hall of the Arts and Industries Building, replacing Charles Lindbergh's Ryan NYP Spirit of St. Louis in the place of honour.

In this notebook, Horace Short made detailed sketches of the Wright Flyer from which the first official working drawings were made. The flying demonstrations… 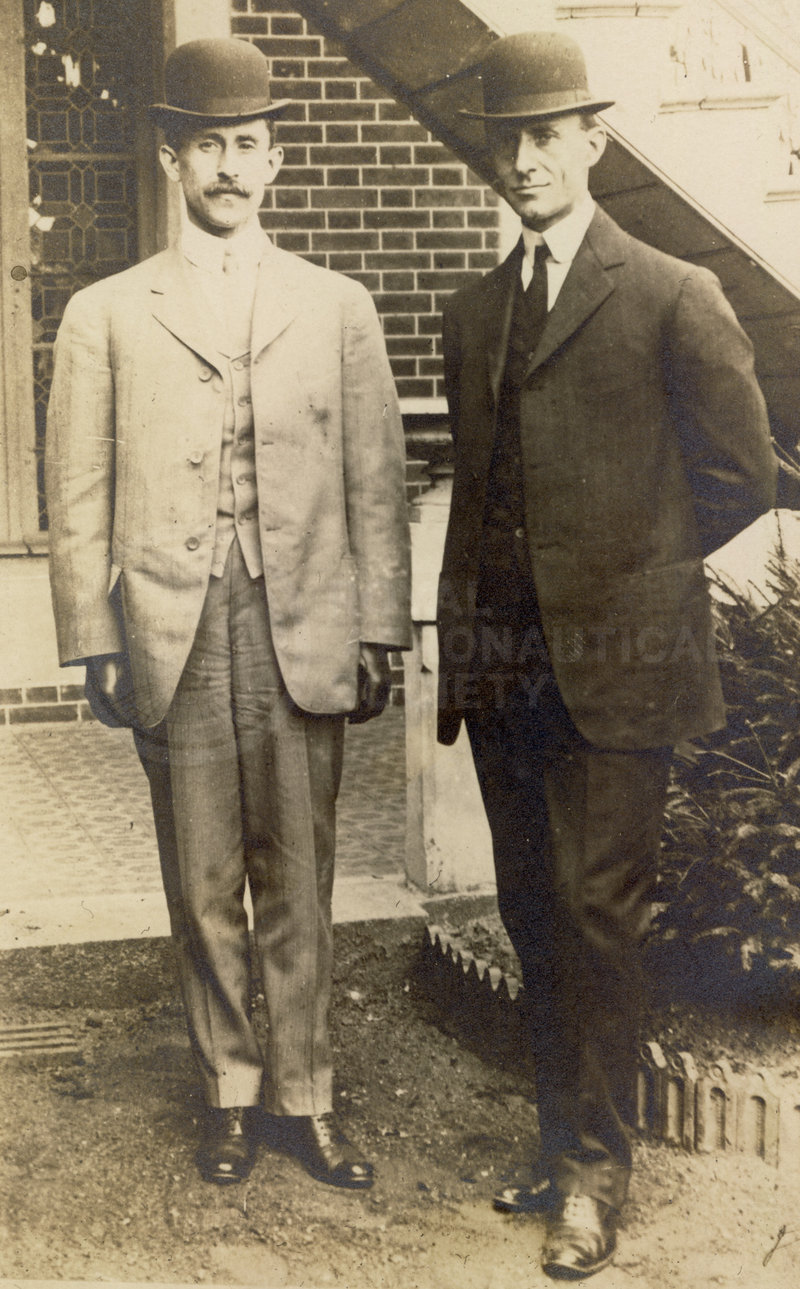